Scent of Hope and Miracles

To paraphrase Shakespeare, dogs smell our heart on our sleeve. That is why a year ago last night, when faced with the prospect of losing our beloved Sadie Dog, I left behind my sweater. 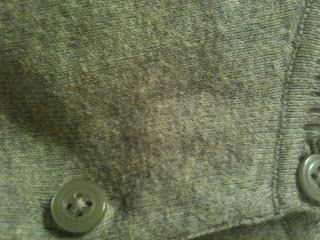 I recounted this emotional experience in "2 Rattlesnakes, 1 Pit Bull and a Miracle!' published last fall in The American Dog magazine:

As we stood in front of a bloated creature that no longer resembled Sadie, a veterinarian said, “We’re running out of options.” She was hooked up to machines and vials. An alarm sounded indicating that her heart rate had surpassed 200 beats per minute. Her head was the size of a watermelon, and the swelling had spread to her abdomen. An awful smell and black fluids spewed from her mouth. The vet did not think Sadie would last the night. Still, we authorized more antivenin and a blood transfusion.

We wept and stroked her ears, the only parts of her not swollen. Sadie started to sniff my hand. I pulled off my sweater and placed it in front of Sadie’s nose as we said goodbye.

The next morning’s report read that the vet had recommended euthanasia and that Sadie had then sat up and vocalized. The report went on to state that, later, when the time had come to transfer her to another hospital, Sadie had “walked to the van.” No one could believe the transformation that had occurred.

Experts say the simple act of leaving behind a piece of clothing can provide comfort to a dog in your absence.

Your dog knows your scent and has it filed in his memory, along with the smells of all the other people he's been introduced to. Some people your dog will remember with affection, others with fear and loathing -- and his "scent memory" will be triggered every time he meets them.  The one smell dogs value most is the smell of their owners. "It's a familiar smell that conveys comfort and safety," says San Francisco-based trainer Tory Weiser.


I truly believe that my sweater, which contained my scent, gave our dog hope. Modern veterinary medicine carries the body to a more stable, healthier state. But I also attribute Sadie's miraculous turnaround to a higher power. I carried my emotions on my sleeve when I visited that night. But I also carried hope. Sadie could smell that. And she knew she was loved. That, in my mind, carried her beyond what looked like certain death.
Posted by LMo at 4:29 PM 2 comments: 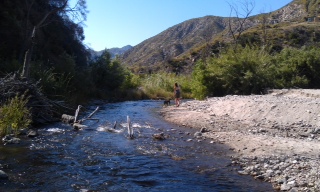 "It happened so fast." We hear that phrase each time someone recounts a tragic event whether it was a hit-and-run accident, a mugging, a fire...


And yet, in the moment, everything moves in slow motion. That too has been reduced to cliché. But that is exactly how I remember it.

I saw it out of the corner of my eye. It swung like a rope in Sadie's grinning jaws. And I saw the blood dripping from its fangs. And then I shouted, "Drop it!"

And Sadie did. And time shifted back to normal. But it wasn't normal. I tried to edit away the vision of the bloody teeth, even suggesting Sadie had picked up a dead snake. Snakes don't swim; Sadie found a dead snake in the water.  But my husband Matt saw the telltale puncture wounds. And we would later learn that rattlesnakes are in fact capable swimmers.

This was not what we'd had in mind when we packed up for a last-minute Memorial Day camping trip in Angeles National Forest. It was perhaps the worst day of our collective lives. We were far too upset to think straight. "It happened so fast."  We had gotten lost on our way in and now we'd have to trace those steps with a 60-pound wounded dog in tow.

Sadie went into shock, stumbling forward and collapsing at our feet. Panic turned to doubt. How were we going to get out of here?

And then, out of the corner of my eye, I saw them. A middle-aged couple was bathing in the creek just yards away from where Sadie was bitten by the snake. I shouted to them. "Help us!"

We ruined their peaceful afternoon. And I don't even know their names, nor do I know where they live. They have no idea Sadie survived. "It happened so fast." I asked them to help and they dropped everything to join our pathetic effort.

They, particularly the woman, truly saved the day, leading us forth in the correct direction and not leaving our side. She was there when the second snake sprang up from the grass, striking a blinded, swollen and bloodied Sadie. She heard us cheering for Sadie to keep going. We couldn't have done it alone. We were almost as helpless as our brave but fading dog.

The post-traumatic stress haunts us each time we enter the woods. We hold Sadie's leash tight; stare intently at the ground and creek beds and hold our breath when we pass the sign for Devil's Canyon where "It happened so fast." Sadie found two snakes that bit her. And we found our way thanks to two selfless strangers.
Posted by LMo at 12:18 AM No comments:

One Tough Bitch & Her Lucky Pack

It's been an incredible journey. Sadie nearly died 6½ months ago after she was bitten by not one but two rattlesnakes in the same day. Each morning I awake to Sadie having stolen my covers is another day to give thanks for a miracle. This dog is incredible. She is, as a good friend remarked, "One tough bitch." She is also a beautiful, affectionate and tenacious companion that defies stereotypes and beats the odds.

Her story has been featured in The American Dog Magazine as well as on DogCast Radio in two installments: Part 1 and Part 2. As a result, she's accumulated an impressive Facebook and Twitter fan base. 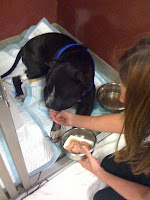 Should you find yourself similarly moved by Sadie's remarkable and death-defying story and/or touched by the actions of her alpha female and male, we welcome your friendship and support.

Additionally, we are thankful to all who have already donated toward our veterinary-bill debt. If you are willing and able, we thank you in advance for chipping in via PayPal at this link. We also have a fabulous collection of Sadie-inspired gifts on sale at the Smiles for Sadie CafePress store. 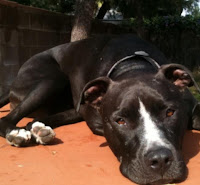 Reflections on an Incredible Journey 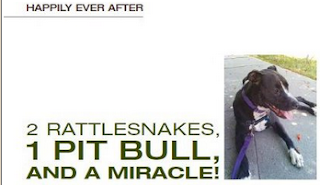 Sadie snores blissfully, nestled between her alphas in our bed as I write tonight. It's four months into the journey that started with tragedy, led me to create Smiles for Sadie Facebook Fan Page to maintain sanity during one of the most difficult weeks of our pack's collective life and ultimately morphed into something so much more meaningful.

Smiles for Sadie is more than a vanity project to showcase cute photos of our beautiful dog. This multimedia project is a tribute to a miracle and our goal to promote rattlesnake awareness for pet owners.

Friends, family, colleagues, neighbors and strangers worldwide have provided shoulders, prayers and dollars of support. Additionally, Sadie's incredible story has garnered unsolicited media attention.
In the wake of last month's feature in American Dog Magazine, I was delighted to this week hear the resulting podcast of an interview I had done with DogCast Radio a couple months back.

Julie Hill in England (!) discovered Sadie's tale on Facebook and invited me to Skype in for an interview on DogCast, which she's spread over two shows.

Part 1 aired this week and is available for download or streaming at DogCastRadio.com and iTunes. I am truly honored and grateful to have had the opportunity to run my mouth for Sadie and rattlesnake awareness. I hope our story serves as an important warning to everyone who enjoys the Great Outdoors with their pets.

Additionally, I hope Sadie Dog and we inspire and educate others who find themselves in similarly frightening and tragic situations. For this purpose, I continue to collect and display rattlesnake-awareness resources for dog owners. Thanks, Julie, and everyone for your continued interest and support!
Posted by LMo at 3:09 AM No comments:

Vote for the SADIE as The Next Pet Star - Photo Contest 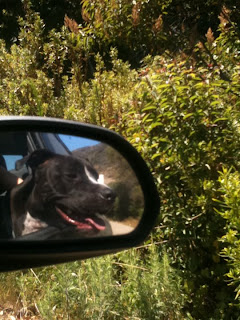 Because it was a rough ride and we thought we'd never see her smile again!
Posted by LMo at 7:08 PM No comments:

One of the first things we did after Sadie's near-fatal double-rattlesnake encounter was sign her up for rattlesnake-aversion training with Ma 'n Paw Kennel Canine Training. Here's a resource for Arizona-based dog owners.
The Payson Roundup / Making dogs rattlesnake smart

Roger May of Mayday Retrievers in Oxbow Estates presented a program by Jay Smith on rattlesnake avoidance training this weekend. It is something he tries to do once a year, he said.

Smith operates Community Dog Training in Oracle, north of Tucson and is a member of the Association of Pet Dog Trainers, which can be found at www. APDT.com.

He explains, “This learning theory simply says: Anything that immediately follows a behavior will increase or decrease the chances of whether that behavior will be repeated."

What to Do if Your Dog Eats Ant Posion 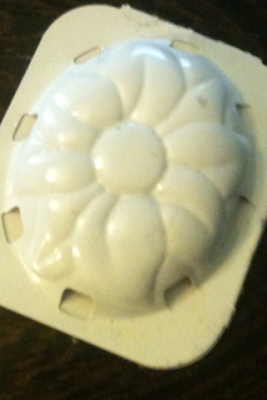 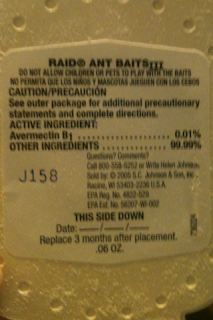 We caught Sadie gnawing at a Raid Ant Bait this morning. First thought: another ER visit? I Googled the issue and apparently dogs quite frequently find and eat these sugary traps.
This article from eHow, "What to Do If a Dog Eats Ant Killer" allayed my fears.
"A quick response may save your pet's life, but depending on the chemical involved, home remedies may be all you need," explains writer Mary Earhart.
Her advice? Read the label. Avermectin is one of the more common and least threatening to your dog's health when ingested in small amounts. Avermectin accounts for just 0.01% of the contents of the sugar-laden bait Sadie had in her mouth. And avermectin is not all bad: It is an active ingredient in Heartgard to treat heartworms in dogs. So, it seems the situation is not critical.
Just to be sure, I phoned Sadie's vet. Sadie weighs 60 pounds and had not actually eaten the trap. She chewed it like a toy. The fact she had not swallowed the trap whole is yet another reason not to worry too much, he explained. His advice? Keep an eye on her and watch for lethargy and any foaming at the mouth. If that happens, call the ASPCA Animal Poison Control Center, which is best suited for walking pet owners through necessary steps to diagnosing and troubleshooting poisoning. Here is the number (note: there is a $65 fee, but it's cheaper than an ER visit): 888-426-4425
We'll have to do a better job of hiding these traps. Or find a dog-friendlier alternative.